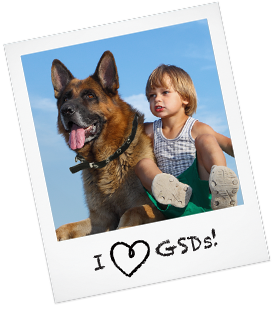 Thinking about adopting a German Shepherd puppy? Here are three reasons to adopt an adult instead:

Like most people, you’ve probably heard time and again that if you have kids, you should adopt a German Shepherd puppy (or, gasp! find a German Shepherd puppy for sale). The rationale is that an adult shelter dog is an unknown quantity, so buying or adopting a German Shepherd puppy is safer. Actually, the opposite is closer to the truth. Puppies are not usually a great choice with kids; they have very limited control over their biting/mouthing impulses, and when you mix that with lots of energy and unbelievably sharp little teeth, it’s a recipe for your small fry to be in tears.  Puppies are tiny chewing machines and can destroy a favorite stuffed animal or security blanket in short order.  Adult dogs, on the other hand, are generally calmer, and their personalities are already fully developed and on display.  When you meet an adult dog, you can see how they are with kids and with other animals.  This takes the guesswork out of wondering how a puppy will turn out as a full-grown dog.

Puppies teethe.  They have a biological need to chew, they want to play constantly, and they can’t discriminate between appropriate chew toys and, say, your favorite pair of Manolos.  Puppies eventually can be trained out of this behavior, of course, and there are exceptions to every rule, but generally speaking, an adult German Shepherd (or any adult dog) is much less likely to shred your drapes like coleslaw or function as a “helpful” canine document shredder.

Pop quiz: how often does a two-month-old puppy need to be taken out to do his business during the day?  A) every six hours; B) every eight hours; or C) every two hours?

If you answered B, or even A, you’re an eternal optimist! The correct answer, though, is C: every two hours. When you’re housetraining a puppy, the general rule of thumb is that they can hold their bladder one hour for each month they’ve been alive (up to a max of about eight to ten hours).  So a three-month-old German Shepherd puppy needs to go outside every three hours, a four-month-old needs to go every four hours, and so on.  If you’re retired, or you work from home, or you’re taking the puppy to work with you or to a doggy daycare (make sure your puppy is up-to-date on all vaccines before considering that last option), great! But if you’re planning on leaving your dog alone during your workday, you’ll definitely want to adopt a full-grown dog, ideally from a German Shepherd rescue that can help you find the right dog for your lifestyle.

Let’s bust these myths about adopting a German Shepherd

Time to get real: when we ask people what reservations they have about German Shepherd adoption, we hear the same things over and over again.  If you’re operating under any of these mistaken beliefs, you just might be missing out on meeting the best friend you’ll ever have.   So it’s time for us to set the record straight:

Here’s the truth: you absolutely can find a German Shepherd, even a German Shepherd puppy, for adoption in an animal shelter or rescue group.  And they don’t end up there because they’re bad dogs.  In fact, often the only difference between the dog in the shelter and the one on your couch is a bit of bad luck.  Think about it: let’s say you buy a German Shepherd puppy for sale by a breeder. Your new dog is great; you immediately enroll the two of you in obedience classes, and soon your best pal is housebroken and well trained. But what would happen to your wonderful German Shepherd if, tragically, something happened to you? What if he escaped from your home and ran away? Your best pal would very likely end up in an animal shelter.  The lucky person who adopts your German Shepherd would be getting a great dog!  Animal shelters are filled with wonderful, healthy, well-behaved dogs who have been in homes before, but whose owners have fallen on hard times.  Many of them are housebroken and trained.  German Shepherd rescue organizations often care for their adoptable dogs in foster homes, which means their foster families will be able to tell you if the German Shepherd you want to adopt is good with other animals or kids, and if he or she is housebroken and knows any basic commands. As you can see, adopting from a rescue organization is likely the very safest way for people with children to add a new German Shepherd to their family!

Prev postNext post
Use your ← → (arrow) keys to browse